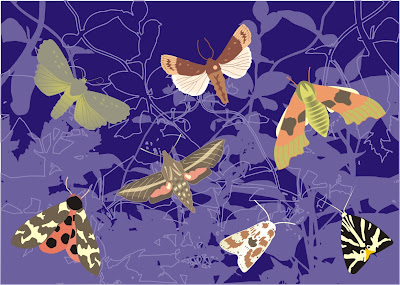 Late at night the moths come out!
For Illustration Friday ©2008 Nicky Linzey
Posted by Nicky Linzey at 19:53 13 comments: Links to this post 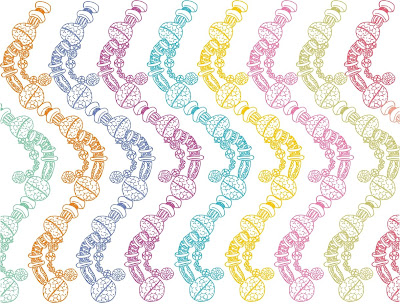 Strings of beads, line drawing for Illustration Friday. These are beads that I've collected over the years from broken necklaces - some silver, some glass, I keep thinking I'll re-string them one day but I never do . . . Click on image for a better view.
© 2008 Nicky Linzey
Posted by Nicky Linzey at 16:01 13 comments: Links to this post 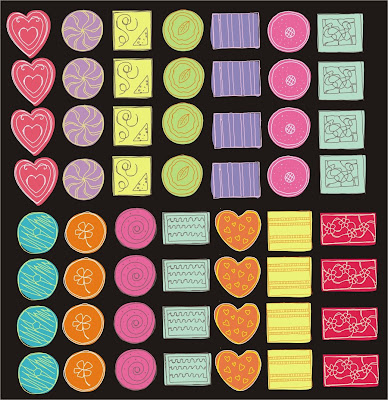 My drawing of petit fours for the theme of sugary on Illustration Friday this week. I love the colours and shapes of these little cakes when they are made well, the're like individual works of art.
© 2008 Nicky Linzey 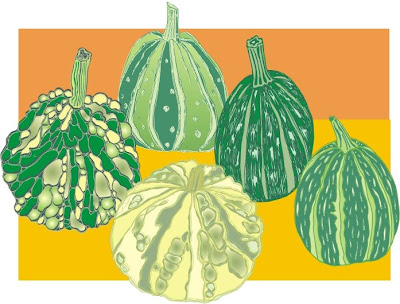 This is the first drawing of the squash I did that led on to the 'packed' illustration.
I've now found out more about growing these from seed - they are known for being promiscuous! Apparently I should pollinate them by hand if I want to retain the variety as they can cross-pollinate, then I would need to put an elastic band on the top of the flower to stop any insects crawling inside. Sounds like a bit of a palaver to me. I haven't had any problems before and I rather liked the shock of all the strange shapes growing. We tried some for lunch yesterday, they were yummy and, as we're still here, not poisonous!
© 2008 nicky linzey
Posted by Nicky Linzey at 17:50 3 comments: Links to this post

Hello, thanks for visiting my blog. I'm here for contact with the outside world - I work with my partner and we have a naughty terrier x called Finn, for company! This is a place for my ideas and observations - inspiring me to record and create. All rights reserved © Nicky Linzey 2007-2016.